The Astonishing Life of Octavian Nothing, Traitor to the Nation, Volume I: The Pox Party 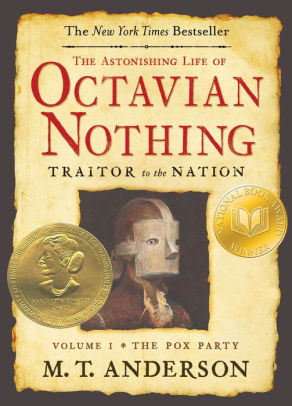 M.T. Anderson juxtaposes the struggle for independence and liberty in the American colonies in the years leading up to the Revolutionary War with the paradox of slavery. The novel’s protagonist, a boy named Octavian, lives with his mother in the College of Lucidity, a community of enlightenment where he is surrounded by learned men who teach him Greek and Latin, music and philosophy. He is their student and their star, often called upon to show off his knowledge and musical prowess. His tutors take acute interest in everything Octavian does, even weighing and recording his bodily excretions. To Octavian there is nothing strange about this—it’s the only life he’s ever known. But one day he discovers a sickening truth: he and his mother are slaves. The College owns them, and he is the subject of their bold experiment designed to determine whether Africans have intellectual capabilities equal to those of white men. He pieces together more of the story from his tutors when he confronts them, and from his mother, whose sadness Octavian can only begin to sense. He is still struggling to reconcile his feelings about the community’s terribly misguided but well-intentioned goal of proving Africans are indeed fully human when a new College funder with strong ties to the southern colonies, and a strong interest in the experiment’s failure, steps in. In this first of two volumes, Anderson follows the fate of Octavian from his life of strange and chilling “privilege” to one of servitude, and then soldier and fugitive. The dense, eighteenth-century prose style will be a struggle for some teen readers. But Anderson’s provocative exploration of ideas debated as central to the foundation of our nation when it was new in the context of Octavian’s story makes this novel well worth the challenge, and an outstanding consideration for high school classrooms. ©2006 Cooperative Children's Book Center