Dear Miss Breed: True Stories of the Japanese Incarceration During World War II and a Librarian Who Made a Difference 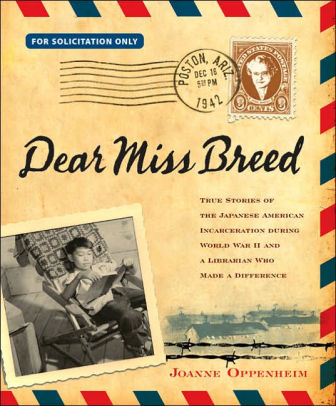 When Japanese Americans in San Diego were imprisoned during World War II, Clara Breed, the children’s librarian at San Diego Public Library, distributed stamped, self-addressed postcards to many of the children and teens she knew from her work. She asked them to write and tell her how they were doing, and they did. Over the course of the next two-and-a-half years, they kept her informed about their lives, first at the Santa Anita racetrack, where many families were given a small space in the stables that still reeked of horse urine, and then at Poston, the “internment” camp in the middle of the Arizona desert where many ended up. She wrote them too, and although only one of those letters survives, it is clear from their correspondence that her many letters and cards, Christmas gifts and care packages, and books—many, many books--helped them know, just as she had intended, that they were not forgotten. An extensively researched, page-turning narrative (even the endnote’s are lively) minces no words when describing what happened to Japanese Americans during World War II. And she deftly explores the complexities of the situation in which Japanese and Japanese Americans in the country found themselves, as well as their many and often conflicted feelings about it. But at the center of this deeply moving chronicle is the huge heart and critical, outspoken mind of one woman who saw a wrong and did what she could both personally and professionally to make a difference, as well as the lives of the many children and teens that she touched. Extensive photographs, and many of the letters and notes written to Clara Breed, are included. Interviews with many of the surviving correspondents and others who knew Miss Breed, and testimony from Japanese Americans who spoke on their experiences at Congressional hearings in 1981, are an integral part of this outstanding work. ©2006 Cooperative Children’s Book Center