Let Me Play: The Story of Title IX, the Law that Changed the Future of Girls in America 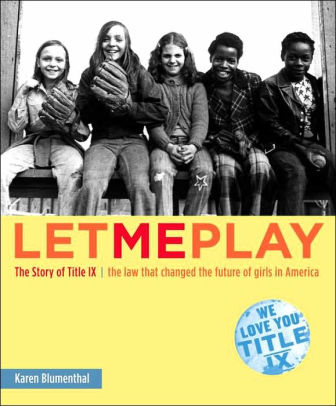 With so many girls and young women today playing competitive sports or pursuing whatever field of study that interests them, it’s no doubt difficult for them to fathom how different their lives would have been had they been growing up in the United States before the law called Title IX. Passed in 1972, Title IX bans educational institutions that receive federal funding from treating boys and girls differently because of their sex. Karen Blumenthal’s fascinating, well-researched history of Title IX is packed with engaging personal stories of athletes, politicians, and everyday girls and women who grew up before, during and after the fight to legislate and enforce it. Blumenthal relates how this “modest little law” has became a force to be reckoned with thanks to advocates who have fought for the chance to show how much muscle it really has. In doing so, she shows how Title IX was both the result of and fueled by sweeping social change that continues to be inspiring. ©2005 Cooperative Children’s Book Center