At Her Majesty's Request: An African Princess in Victorian England 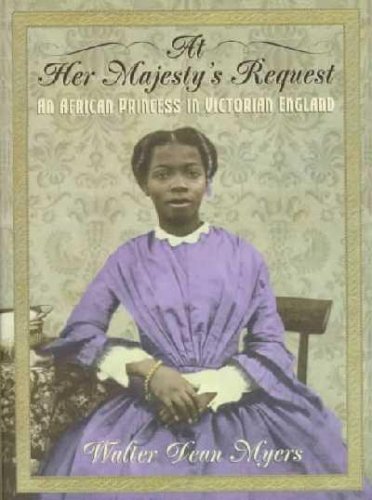 When author Walter Dean Myers came across a packet of old letters in an antiquarian bookstore several years ago he wanted to know more about the person who had written them. His careful research into documents at the Royal Archives at Windsor Castle, newspapers of the time, diaries and letters, provided the pieces he needed to retell the intriguing true story of this remarkable young woman. Known to the Western world as Sarah Forbes Bonetta, she had been born into one of the ruling families of the Egbado people in West Africa in the mid-19th century. At age five, after witnessing the brutal murder of her parents during a raid by their Dahomian enemies, she was taken prisoner and marked for ritual sacrifice. A British Commander, Frederick Forbes, convinced the Dahomian leade to spare the child's life by sending her to England as a gift to Queen Victoria. Enchanted by the small girl from the beginning, Queen Victoria saw to it that she was well educated and that she enjoyed a life of material wealth and privilege. As a child, Sarah played with Queen Victoria's children and she maintained close ties to the British royal family throughout her short life. She was something of a celebrity in her own time, although she has been largely forgotten today -- until now. This elegantly designed volume, illustrated with numerous brown-tone photos and drawings from the Victorian era, provides an intimate portrait of Sarah and her times through letters penned by her and her friends, and through Queen Victoria's own journal entries. ©1999 Cooperative Children's Book Center