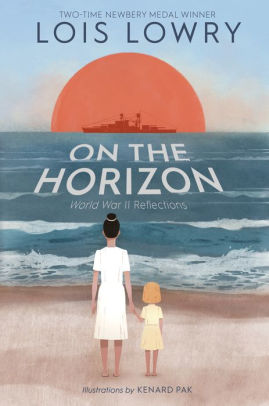 Personal and global history collide in this collection of poems that is part memoir and partly drawn or imagined from the lives and experiences of others. It begins with Lowry’s memories of her young childhood in Honolulu in the early 1940s, moving back and forth between her own recollections and tributes to individuals who’d been stationed aboard the U.S.S Arizona, which exploded and sank with over 1,100 crew members aboard when Pearl Harbor was bombed. Part 2 begins with the bombing of Hiroshima and gives brief, moving glimpses into a few of the tens of thousands of lives ended or traumatized. It also introduces a young boy named Koichi Seii, who felt the blast and saw the mushroom cloud from miles away. In Part 3, Lowry is living in Tokyo, where her father was stationed, after the war. Koichi Seii was living in Tokyo, too. One day Lowry, riding around on her green bike, watched Japanese children in a school yard, including Koichi Seii. In the final poem, she writes: “We could not be friends. Not then. Not yet. … Till years had passed, until we met / and understood the things we’d feared … / Until the cloud dispersed and cleared.” Lowry’s author’s note concluding this deeply moving book tells more about Pearl Harbor and Hiroshima, and recounts her first meeting with author/illustrator Allen Say in 1994, when they both realized they’d been living in Tokyo after the war, and that the girl Say remembered seeing outside his school yard with a green bike was Lowry. ©2021 Cooperative Children’s Book Center