Vango: Between Earth and Sky 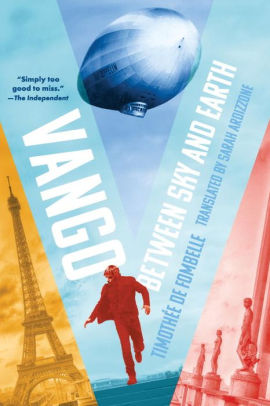 An intricate and intriguing story — part adventure, part mystery, part political intrigue — takes place across the map of Europe between the two world wars and revolves around a young man named Vango Romano. The story alternates between Vango on the run — he’s wanted by Rome police for the death of Father Jean, his beloved mentor — and other characters, and moves between the present and the past. Vango grew up on a small Italian island after he and his nurse washed ashore when Vango was three. His nurse always claimed to have no memory of where they came from. As Vango grew, the monks of Arkadah, a secret island monastery, became his second home. Ethel is a young Scottish woman who met Vango years before, when she was twelve and he was fourteen, on a Zeppelin trip around the world. A young Russian girl wonders about the escaped Bird her father sometimes speaks of, who has eluded capture for years. Her father, it turns out, is Joseph Stalin. And then there is the small, multinational group of World War I veterans who have vowed to do anything necessary to prevent another war. Everything and everyone ultimately revolves around Vango, who realizes he needs to know who he was before he ever landed on that island in order to make sense of what is happening now. Beautifully translated from the French, this breathless work offers clues to Vango’s origins, but leaves many answers for the coming sequel. ©2014 Cooperative Children's Book CenterA

Translated by Sarah Ardizzone. from the French