Because They Marched: The People’s Campaign for Voting Rights That Changed America 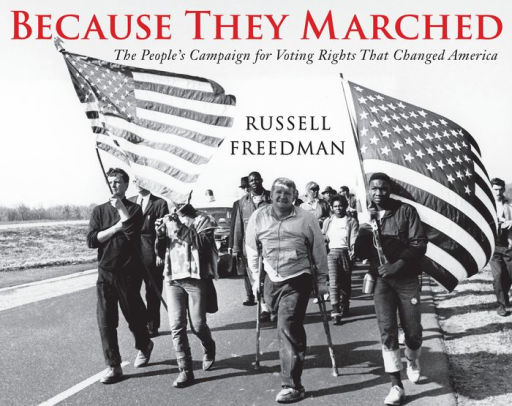 The Voting Rights Act signed into law in August, 1965, was the result in part of direct action taken on the roads of Alabama earlier that year. Russell Freedman’s account summarizes the years of previous voting rights efforts before focusing on the intensifying standoffs in Alabama between activists and law enforcement. The first attempt to march from Selma to Montgomery for voting rights took place on March 7, a day that became known as “Bloody Sunday” when demonstrators were gassed and beaten. The Turnaround Tuesday march two days later was carefully planned to make the point that marchers would not defy a court order but also would not back down: Martin Luther King Jr. led 1,500 people over the Edmund Pettus bridge, where they all kneeled in prayer before returning to Selma. By the time the march launched a third time, on March 21, there was national and international attention focused on Selma and, five days later, Montgomery, with the triumphant arrival of 25,000. Freedman’s account includes individual stories of courage, commitment, and loss, while his essential epilogue notes the recent Supreme Court decision striking down a key provision of the Voting Rights Act, stating that “the meaning of American democracy remains a topic of debate and struggle.” ©2014 Cooperative Children's Book Center