Barnum’s Bones: How Barnum Brown Discovered the Most Famous Dinosaur in the World 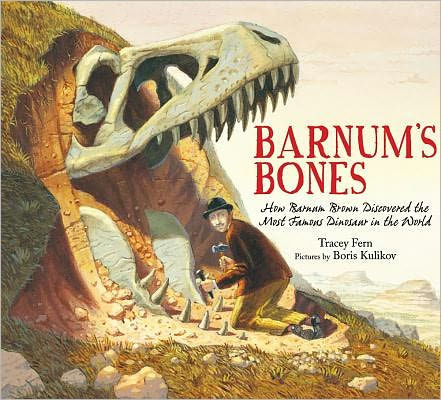 “Something exciting happened in Carbondale, Kansas, on February 12, 1873. The Brown family had a baby boy. It was even more exciting than the circus, and the Browns adored the circus!” In fact, they loved the circus so much they named their new baby Barnum, for P. T. Barnum. But this Barnum grew up to find fame in a different field—fossils and bones. Barnum Brown loved them from the time he could toddle, when he would follow the plow and pick up “ancient corals and clams and snails and scallops.” Barnum developed a reputation from early adulthood as someone who had a knack for finding bones, and Professor Henry Osborn of the American Museum of Natural History (called “My Dear Professor” by Barnum) hired him. Barnum was a snappy dresser, even on field work, but he was also a great bone hunter, pouring over books and maps in addition to digging in the field. His greatest discovery was T. Rex—a new species!—but he also helped the museum amass the largest collection of dinosaur bones in the world. Tracey Fern’s spirited storytelling brings fascinating Barnum Brown alive on the page, and Boris Kulikov’s illustrations add another dimension of delight. An author’s note tells more about Barnum Brown and is followed by a bibliography. ©2012 Cooperative Children's Book Center