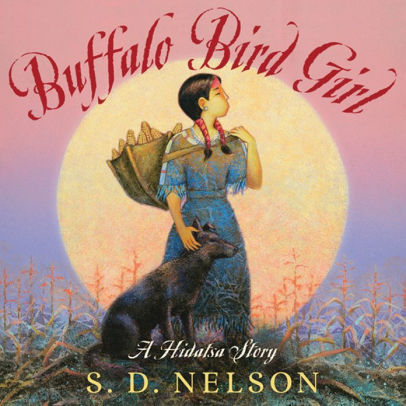 “My name is Buffalo Bird Woman, Waheenee, and my people are known as the Hidatsa. When I was young, they called me Buffalo Bird Girl—after the little brown bird that lives on the prairies of the Great Plains.” In a beautifully realized work, S.D. Nelson pairs a narrative written in the first-person voice of Buffalo Bird Woman (both fictionalized and drawn from sources) looking back on her childhood with illustrations and documentary photographs—including one of Buffalo Bird Woman--showing dimensions of nineteenth-century Hidatsa life and traditions. The mix of illustrations and photographs works wonderfully. Nelson’s striking paintings reflect scenes described in the narrative, which are punctuated with occasional black-and-white photos showing these elements in real life. In an author’s note Nelson describes personal memories that echo some of the traditions described by Buffalo Bird Woman. He goes on to tell more about Buffalo Bird Woman, including the published works about her life on which she collaborated and from which he drew in writing his narrative. He also discusses the Hidatsa people, past and present. A time line, notes, and a bibliography are also provided. ©2013 Cooperative Children’s Book Center