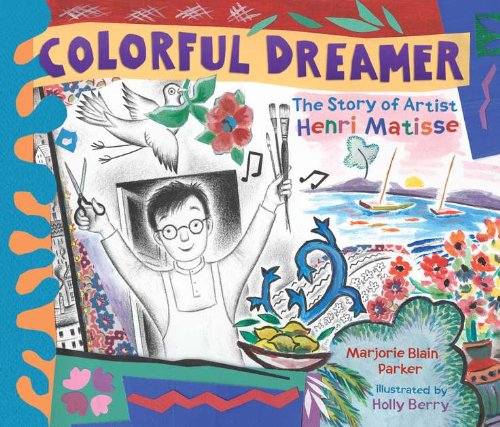 Henri Matisse grew up in a French industrial town “choked with factories, clanking looms, and smoking chimneys.” But Henri found color, in flowers and fabric, and in his dreams. Dreaming, in fact, was something he was good at. To the great worry of his parents, it seemed to be the only thing he was good at. “He dreamed of a colorful and exciting life … He dreamed of being noticed.” The thought of becoming a shopkeeper like his parents “tied Henri’s stomach in knots.” Instead, he grew up and studied law, which wasn’t much better. It was while he was in the hospital, recovering from broken dreams, perhaps, that he started painting and found his passion. It took a long time to make a living at it, but he wouldn’t give up, “and little by little, people noticed.” An artfully written, engaging picture book about Henri Matisse has a thoughtfully crafted narrative and playful illustrations that wonderfully reflect the emotional tenor of stages of Henri’s life and work. ©2012 Cooperative Children's Book Center