All These Things I've Done (Birthright: Book the First) 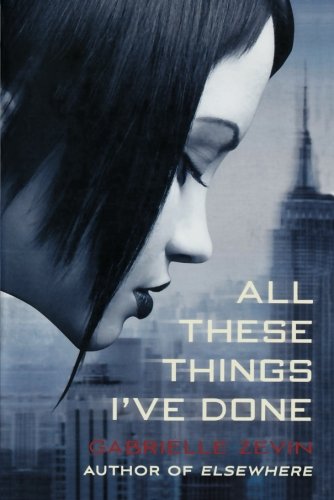 Anya Balanchine is sixteen in 2083, when dwindling financial and natural resources have resulted in several big changes, including the illegalization of chocolate and caffeine. Anya’s father was the head of Balanchine Chocolate, a company that became a crime syndicate after chocolate was outlawed. Both Anya’s parents were killed by mob rivals and Anya has no desire to go into the family business. Her primary interest is keeping her family together. Her older brother, Leo, was seriously injured in the same hit that killed their mother; he has a gentle nature and the mental abilities of an eight-year-old. Her twelve-year-old sister, Natty, like Anya, suffers from nightmares. And her grandmother, their legal guardian, is dying. Then there’s this new boy at school . . . .when Win and Anya meet they are attracted to one another, but he’s the son of the new, politically ambitious New York City assistant DA, and Win’s dad forbids him to date a member of the Balanchine family—an edict Win readily ignores. Meanwhile, Anya’s suspicions about a cousin’s motives behind giving Leo a job prove well-founded, and Natty’s teacher has astonishing news. There’s a lot going on in this story: potentially star-crossed lovers, mafia crimes and intrigue, and a first-person narrative that references David Copperfield with every chapter title. But Gabrielle Zevin keeps it all beautifully balanced as it moves swiftly forward, with Anya’s struggle between personal desires and family demands at its core. ©2011 Cooperative Children’s Book Center