Half Spoon of Rice: A Survival Story of the Cambodian Genocide 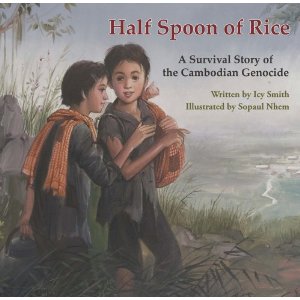 “Survival Story” is essential to the measured approach author Icy Smith took in writing about the Cambodian genocide for children. Nat is a young boy in the midst of preparing for the Cambodian New Year celebration when sudden gunfire in the streets marks the start of terrible times. Along with thousands of others, Nat and his parents are forced out of the city by Khmer Rouge soldiers. Separated from his parents at a labor camp after days of walking, Nat spends the next four years fighting to survive as he works in the rice field. Troops from the Vietnamese Liberation Army eventually liberate the camp, and Nat and his friend Malis make their way over the border into Thailand, where he finds his parents. Malis is unable to learn the fate of her own family. Nat’s voice is matter-of-fact yet full of feeling in a narrative that is honest about the horror and pain but never overwhelms with explicit details. Sopaul Nhem’s paintings masterfully reflect chaos and emotion in a story that concludes with Nat’s family about to emigrate to the United States. An extensive author’s note provides more information about the Cambodian genocide in the 1970s, including photographs of child laborers. ©2010 Cooperative Children's Book Center