Bylines: A Photobiography of Nellie Bly 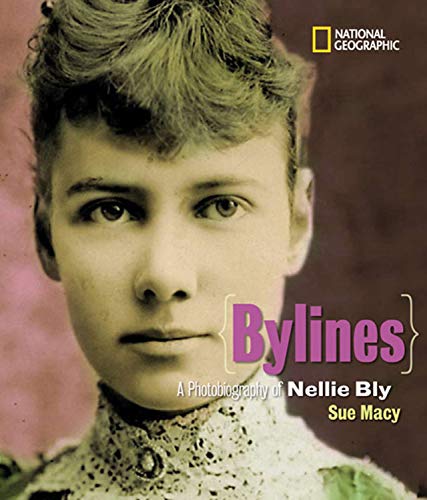 In her introduction to Sue Macy's biography of pioneering journalist Nellie Bly, Linda Ellerbee firmly positions Bly as a feminist and a fighter for social justice. Macy's narrative engagingly affirms that analysis. Growing up in the mid-nineteenth century, Elizabeth Cochrane saw her mother struggle in an abusive second marriage. At twenty-one, Cochrane read an opinion column in a Pittsburgh newspaper against women working outside the home (because their role is to "be a helpmate to a man, not compete with him") and could not remain silent. Her response, which acknowledged that many women must support themselves, argued that women should be able to pursue any work they wish and receive equal pay to what men earn. It launched her career in journalism, under the pseudonym Nellie Bly. By age twenty-five, Bly had reported on female factor workers and their working conditions, gone undercover to chronicle deplorable conditions in a women's asylum, reported on government censorship and corruption in Mexico, and crossed the globe filing stories from around the world. Black-and-white photographs and other period illustrations round out this compelling biography. ©2009 Cooperative Children's Book Center