Ain't Nothing But a Man: My Quest to Find the Real John Henry 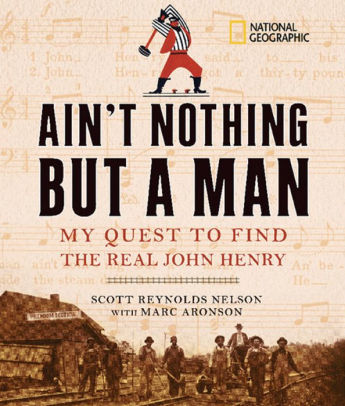 Historian Scott Reynolds Nelson started out researching the undocumented story of African American railroad workers in south in the days when rock was being blasted and track was being laid. One lead he followed was the legend of John Henry. What could that tale—told and retold in song and story—reveal about black railroad laborers? But soon his research focused on John Henry himself—was he a myth or real man? In this fascinating documentation of his research journey, adapted from his adult book Steel Drivin’ Man: John Henry: The Untold Story of an American Legend (Oxford University Press, 2006), Nelson carries readers right along with him through song and story into railroad tunnels and reading rooms, Civil War records and traces of a prison disgrace. He pieced together the facts they reveal and questions still unanswered to offer a theory on the life behind the legend of John Henry. The result is a thrilling—yes, thrilling--look at how history is revealed—at how meticulous research and intuitive leaps that raise hairs on the back of one’s head can deepen understanding of the past. The use of numerous documentary photographs and other images from the nineteenth century add a powerful visual dimension, although some artists’ renderings reference racial stereotypes and an explanation acknowledging this would have been welcome in this volume that is insightful, inspiring, and will be, for many, impossible-to-put down. © 2008 Cooperative Children’s Book Center