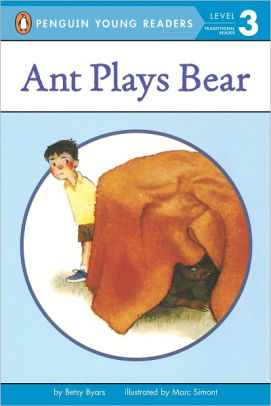 In a follow-up to last year's My Brother Ant (Viking, 1996), Betsy Byars once again creates a remarkably true-to-life easy reader. With his wonderfully wry tone, Ant's older brother narrates four episodes that show us little Ant's overactive imagination. First, after finally convincing his older brother to pretend to be a bear hiding in a cave, Ant is frightened by his growling and decides he doesn't want to play anymore. Next, he bothers his older brother and his friend by pretending to be a dog, until the friend throws a stick and tells him to go fetch it. At night, Ant is convinced that a tree branch tapping against his upstairs bedroom window is a giant trying to get in. And finally, he drives his brother crazy by trying to make him guess what he'll be when he grows up. Seldom have two characters and such a realistic sibling relationship been developed with so few words--and easy words at that! (Viking Easy-to-Read) ©1997 Cooperative Children's Book Center