Six Days in October: The Stock Market Crash of 1929 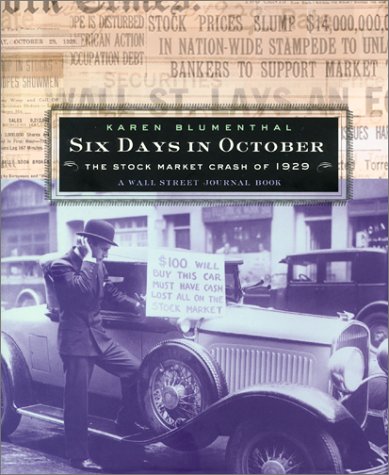 ou don't need to know anything about the stock market or the 1920s to understand Karen Blumenthal's lively account of the events leading up to the stock market crash of 1929. Not only is her prose cogent and dynamic, pertinent terms and concepts are clearly explained in text boxes in the margins and archival photographs add further information. The events of the notorious week in October are placed in the context of their times, an era when it was widely believed that "anyone not only can be rich, but ought to be rich" and everyone was encouraged to invest, even if they had to borrow money to do so. Blumenthal puts a human face on the history by interweaving personal accounts and quotes from several players, including President Herbert Hoover, vice president of the Stock Exchange Richard Whitney, actor Groucho Marx, and an anonymous car salesman who sold his story to American Magazine in February 1930.   ©2002 Cooperative Children's Book Center