Billions of Years, Amazing Changes: The Story of Evolution 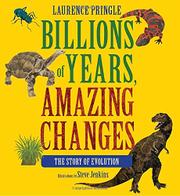 Laurence Pringle’s explanation of the theory of evolution and related scientific principles unfolds in a work that is both understandable and intriguing. Pringle gives readers the big picture by focusing chapters on individual but essential components all of which relate: evolution, variation, competition, natural selection, genetics, missing links, continental shift, and coevolution are presented along with information on how scientists date fossils and other evidence found in nature. Throughout the book Pringle introduces a number of scientists whose discoveries advanced our understanding of the origin and development of life on earth, including, of course, Charles Darwin. He also points to the many fascinating examples in nature of the principles he discusses. And early on, he provides a clear explanation of why evolution is called a “theory” when in science it is generally accepted as fact, explaining that the scientific use of the word “theory” is different than the way we might use it in daily life. This clear, thorough, groundbreaking work for older children and teens is illustrated with vivid color photographs and occasional collage images. ©2011 Cooperative Children's Book Center