Red Cloud: A Lakota Story of War and Surrender 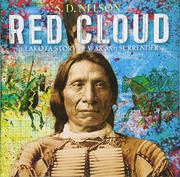 Red Cloud was an Oglala Lakota warrior and chief who led Lakota, Cheyenne, and Arapaho warriors in battles against wasichus, or white men, seeking to colonize the Plains. Written in Red Cloud’s fictionalized first-person voice, this book recounts the unfair treaties proposed by the U.S. government, the necessary development of battle strategies by the Plains Indians, and the Lakota victory against the U.S. Army at the Fetterman Battle/Massacre—a victory that halted the advance of the Army and led to the Indian Peace Commission and the establishment of reservations. Red Cloud disagreed with Native leaders who signed treaties, but after years of resistance he came to believe that surrendering to the U.S. government was the only way to prevent “the complete destruction” of the Lakota people and way of life. Not all Lakota agreed with him when he accepted the terms of the government’s treaty that saw the Lakota settled in the Black Hills (land that would later be taken from them). The illustrations that accompany this compelling account of a controversial chief imitate the Lakota ledger-art style. Photographs and well-chosen quotations are distributed throughout, and additional information is provided in an author’s note. The author is a member of the Standing Rock Sioux Tribe. ©2017 Cooperative Children's Book Center