Sitting Bull: Lakota Warrior and Defender of His People 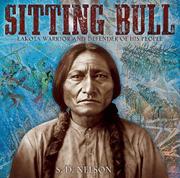 In a fictionalized first-person voice, Nelson offers a powerful, moving narrative of the life of the great Hunkpapa Lakota leader, Sitting Bull. By juxtaposing Sitting Bull’s early life with the presence of the U.S. government troops at the beginning of the book, Nelson introduces the conflicts and contradictions that plagued Sitting Bull throughout his life. Before his birth, the wasichus, or white men, disrupted the Lakota lands and lives. Still, young Sitting Bull grew up in the traditions of his people to become a strong, honorable warrior. Sitting Bull was keenly aware of the “two faces” of wasichus who offered one thing and provided another much worse option. As a leader, Sitting Bull made every effort to protect his people from this and avoided signing treaty rights. When Sitting Bull could no longer protect his people and stave off the government, the tragedy is palpable as he becomes what he once hated: an Indian relying on government handouts. He is ultimately murdered for still being held in such high regard by his people. Integrating ledger-book art, an art form that originated during the last part of the 19th century by Native American artists using discarded ledger books, and weaving together quotes, photographs, illustrations, and prose, Nelson creates a dynamic, engaging biography of Sitting Bull and a welcome perspective on this history. Detailed notes with a timeline and a more personal author’s note are included. ©2015 Cooperative Children's Book Center