All of a Sudden and Forever: Help and Healing After the Oklahoma City Bombing 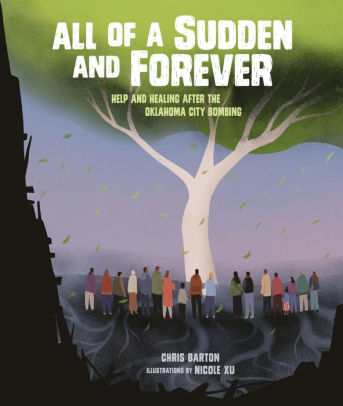 A picture book about the Oklahoma City Bombing focuses on the healing and community support that took place after the fact. In April 1995, a bomb planted in a truck exploded, killing 168 people in a nearby office building. The act of domestic terrorism affected not only those who died or were injured, but also their families and friends and others who watched the tragic event unfold on television. While “the awfulness of that moment can never be undone,” the story continues. A nearby American elm tree, which survived the bombing, became a focal point of hope and healing for many. Its seeds were collected and planted, the saplings later given to survivors. Some survivors told their stories. Others offered and received support from one another. Many found solace at a memorial built for victims of the bombing. Perhaps most importantly, “when other terrible things happen,” the act of comforting and supporting one another in the face of tragedy will continue. Survivors of one traumatic event will comfort those affected by another. Although based on a specific event, this sincere narrative of communal healing has broad applicability and the potential to resonate with survivors of various types of trauma. ©2021 Cooperative Children’s Book Center