Bomb: The Race to Build—and Steal—the World’s Most Dangerous Weapon 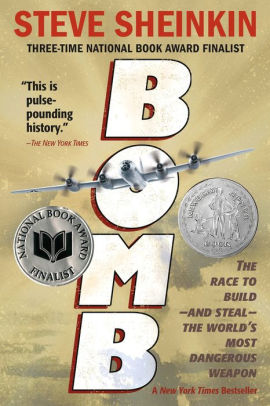 Three related story lines starting in World War II are given fine treatment in an account that chronicles the formation of and work on the Manhattan Project, the Allies’ efforts to sabotage Germany’s atomic bomb development, and the Soviet’s attempts to discover and steal details of U.S. plans for the atomic bomb. Each element is fascinating, from the secrecy and wide array of personalities on the Manhattan Project, to the heroics of Norwegian partisans whose sabotage of Germany’s heavy-water production and shipment disrupted German efforts to develop a bomb, to the intrigue of the Soviet spying. It’s the stuff of Hollywood movies, but real. Author Steve Sheinkin reveals the complexities of politics, of personalities, and of logistics in a work that follows the timeline through to the dropping of the first atomic bomb on Japan, and the growing feeling of dismay and dread that followed. At Los Alamos, celebrations turned sober as the reality of what had been unleashed sunk in. An epilogue includes Manhattan Project leader Robert Oppenheimer’s frustrated efforts after the war to end the arms race by requesting the U.S. government halt weapons development. Sheinkin offers a comprehensive list of sources detailing the immense amount of research he conducted. It’s unfortunate that his notes on quotation sources fail to document page numbers, and that he doesn’t acknowledge that the use of the term KGB is anachronistic for the time period, but it’s an incredibly arresting nonfiction thriller nonetheless. ©2012 Cooperative Children's Book Center