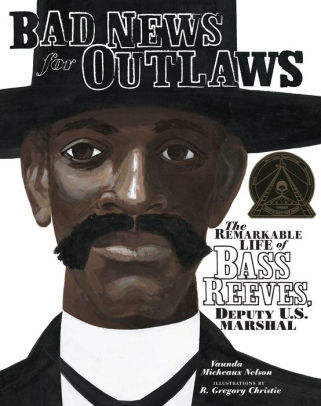 Bass Reeves was big, tall, and strong, wore a bushy mustache, and rode a powerful horse. “But the biggest thing about Bass Reeves was his character. He had a dedication to duty few men could match. He didn’t have a speck of fear in him. And he was as honest as the day is long.” As a young enslaved man in the 1840s, Bass hit his owner. To avoid death, he ran away to Indian Territory, where he lived on the run until after the Civil War. Eventually Bass became a U.S. deputy marshal for the territory, where he gained a reputation for his sharpshooting and clever use of disguises. His capture rate was high, and he was both respected and hated by the people of the time. Criminals didn’t want Bass tracking them down, and “some whites didn’t like the notion of a black man with a badge.” Striking oil illustrations capture both the dignity of the man and the drama of his job. A glossary, timeline, list of further reading, and additional information about Indian Territory and the judge under whom Bass Reeves worked are included in the final pages. ©2009 Cooperative Children's Book Center