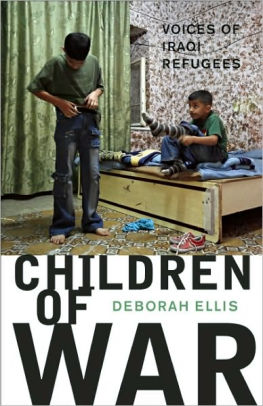 The voices of Iraqi refugee children between the ages of ten and eighteen who have been displaced because of the war in Iraq speak from the pages of this compelling work. Some live in refugee camps in Jordan, others in cities in that country; a few are now in Canada. The children represent a range of religious and ethnic groups and backgrounds: Christian, Sunni, Shia; Kurdish; poor, middle class, wealthy. A few of them have been physically injured by war; all have experienced the trauma of loss, whether of a loved one or their home. Their voices are powerful and sometimes heart wrenching, whether describing their lives before displacement, expressing feelings of sadness, frustration, or anger, or sharing hopes for the future. Deborah Ellis’s outstanding introduction gives context to the lives of her subjects with a brief overview of recent history in Iraq, including both the first Gulf War and the current war. Missing from her introduction to the book or to the words of each child is any sense of what questions were asked during the interviews, an unfortunate oversight, but one that cannot diminish the power of these voices. A black-and-white photo of each child or teen accompanies his or her words. ©2009 Cooperative Children's Book Center