Freedom Walkers: The Story of the Montgomery Bus Boycott 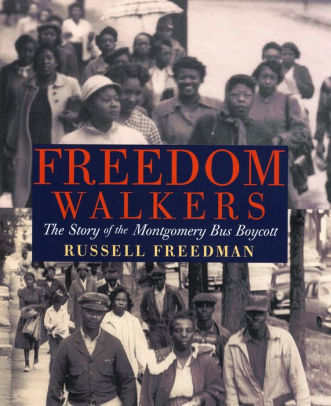 Russell Freeman’s absorbing narrative documents the Montgomery Bus Boycott in a volume further enriched with numerous archival photographs. From an opening chapter that provides an overview of conditions for blacks in the Jim Crow south, where both laws and attitudes were oppressive, Freedman goes on to tell the painful and compelling stories of several black woman who were humiliated, and in one case arrested (and later convicted for defying segregation laws and resisting arrest), on Montgomery buses prior to Rosa Parks. These stories set the stage for the rest of the narrative, which focuses on Parks’s arrest and the passionate, carefully executed response of the black community as it sought to challenge the status quo both in the courts and on the streets. The boycott is detailed as a tremendous act of organization, faith, courage, and cooperation, involving both well-known leaders and everyday citizens in the Montgomery black community. As seen here, the ingenuity and solidarity of that community and its supporters as Montgomery’s government leaders and others tried to stop them at every turn was remarkable, and remains inspiring. ©2006 Cooperative Children's Book Center