The Librarian of Basra: A True Story from Iraq 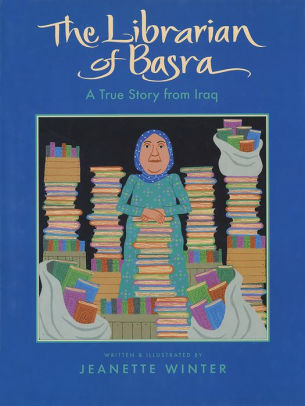 Alia Muhammad Baker is the librarian of Basra, Iraq. “Her library is a meeting place for all who love books. They discuss matters of the world and matters of the spirit. Until now – now they talk only of war.” In 2003, with the U.S invasion of Iraq imminent, Alia Muhammad Baker wondered what would happen to the books in Basra’s Central Library if their city was attacked. When the governor refused her request to move the books to a safe place, she began smuggling volumes out of the library each night after work. When the war reached Basra and bombs began to fall, Alia frantically called upon nearby neighbors of the library to help her save more books while buildings in the city burned. Over the course of one night, they packed books in crates, sacks and curtains, passing them over a 7-foot wall to hide them in the restaurant next door. In all, they saved 30,000 volumes, which Alia later hid in her own house and the houses of friends. There they remain, while Alia dreams of peace, and a new library for Basra. Jeanette Winter’s riveting picture book account of the real-life, heroic efforts of Alia and others to save the books of Basra’s library combines a tense, spare, present-tense narrative with stirring visual images that suggest the panic, destruction and despair of war, but always in the context of the hope that grows from the actions and dreams of individuals determined to make a positive difference. ©2005 Cooperative Children’s Book Center