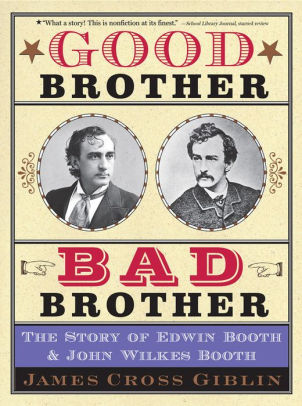 John Wilkes Booth was the man who killed Abraham Lincoln. Edwin Booth was the brother of the man who killed Lincoln. While this may be historically true, it is also incomplete shorthand. James Cross Giblin spells out the lives of these two fascinating brothers in this captivating volume. Both were actors, the sons of a legendary figure in American theater. One would follow his father’s footsteps and become a theater legend in his own right; the other would become one of the greatest villains in U.S. history. Giblin follows each of the brothers across America as they pursued their acting careers. While both displayed dramatic and sometimes impulsive behavior in their youth, Edwin, much older than John, went from generally reliable to steadfast as he aged. John went from impulsive to hotheaded to irrational as tensions between the North and South mounted prior to and during the Civil War. While not political, Edwin was a quiet supporter of Lincoln and the North; John a vehement defender of the South. How did two brothers turn out so differently? Giblin doesn’t answer what is, perhaps, an unanswerable question, but through his exhaustive research that draws on many primary sources, he does give some insight into the lives and minds of these two influential men. ©2005 Cooperative Children's Book Center