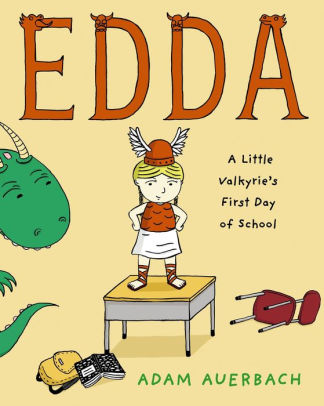 Life in Asgard is lonely for Edda, the youngest of the Valkyries. Luckily, her papa knows the perfect place where she can make friends, taking her to school on Earth. But the first day of school can be scary, even for a brave little Valkyrie. It proves to be disappointing, too: There are rules to follow, the only creature is guinea pig Rex, no one wants to trade at lunch, and she has to write. Writing is hard. Wishing she were back home, Edda writes a story about a monster on Asgard. It’s a huge hit. All of her classmates clamor to know more about where she comes from. So when her papa picks her up at the end of the day, he arranges a playdate for one of her new friends. The sight of Edda in her Viking garb among average kids on Earth, who simply take her appearance in stride, or Edda and her classmate flying off with her huge Viking papa on his horse, are among the many priceless visual moments in Adam Auerbach’s debut picture book that looks at a common rite of passage with fresh wit and emotional honesty. ©2014 Cooperative Children's Book Center