Beyond Courage: The Untold Story of Jewish Resistance During the Holocaust 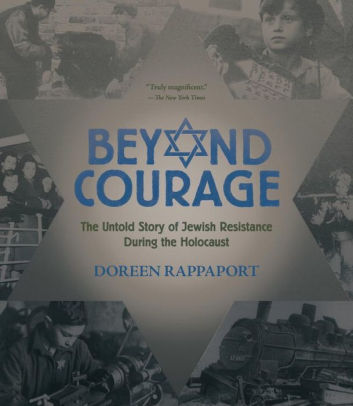 A comprehensive, compelling look at Jewish resistance on many fronts during the Holocaust affirms the numerous ways Jews fought back: ghetto uprisings, partisan fighting, underground work, and escapes or attempts to escape from camps, but also the simple, courageous act of continuing to find ways to actively observe their faith, or stealing food, or refusing to brutalize others. Doreen Rappaport’s affecting work incorporates the stories of many individuals into an account that illuminates the darkness of the Holocaust with the light of courage and faith and compassion, and the fuel of anger. While many books about the Holocaust for young readers focus on stories of individuals in hiding or who helped Jews—both of which are included here—the accounts of armed and active resistance are unusual and refreshing. Among them is the Bielski settlement, a vibrant community of armed Jews that formed deep in the woods of Eastern Europe. Numerous photographs are included in this work that ends with a timeline and detailed source notes. ©2012 Cooperative Children's Book Center