Digging for Words: Jose Alberto Guierrez and the Library He Built 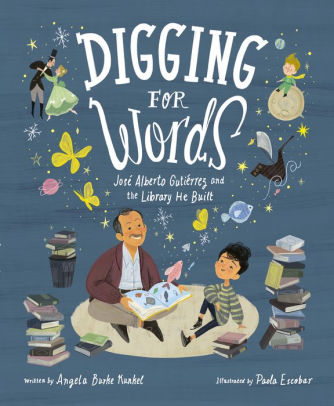 A fictionalized story based on José Alberto Gutiérrez, a man who, in his job as a garbage collector in Bogotá, Colombia, began collecting cast-off books and started a library for his neighborhood. The narrative begins with a small boy, also named José, eagerly awaiting Saturday before introducing his friend, Señor José, and his work. Although Bogotá has libraries, it doesn’t have enough to reach the huge population, including the barrio where Little José lives, and he looks forward to visiting Señor José’s library every weekend. The engaging writing uses descriptive language to bring the people and the city they live in to life. The often captivating artwork give readers a good sense of the vibrant Colombian capital, and the particular neighborhood where the two Josés live. An author’s note offers additional information about the real José Gutiérrez, including photographs of him in his truck and greeting local children in his library.