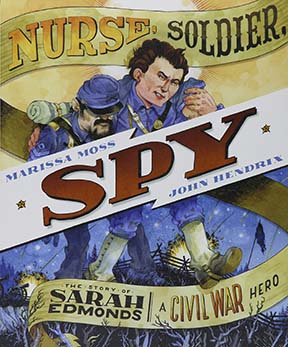 The first time Sarah Emma Edmonds tried to join the Union Army as Frank Thompson, she was rejected for being too young. But a month later, “Frank” was accepted into the Michigan Volunteer Infantry. Frank’s skills were equal—and in some cases better—than many men’s, but small feet earned him the nickname “Our Little Woman.” Frank served as a soldier and nurse, and then began to spy behind enemy lines, a role he continued for multiple missions. Marissa Moss’s lively account of this Civil War soldier and spy who passed as a man for the duration of her service recounts Frank’s early days as a soldier and first mission as a spy, posing as a freed slave. Frank’s success was due in no small part to Sarah’s intelligence. Moss’s author’s note providing an overview of Sarah’s life after this story concludes is followed by a list of resources used by Moss and illustrator John Hendrix, and two photographs: one of Sarah Edmonds, and one of Sarah Edmonds as Frank Thompson. ©2011 Cooperative Children's Book Center