Kids at Work: Lewis Hine and the Crusade Against Child Labor 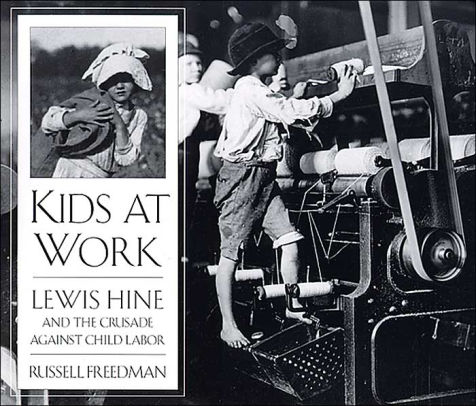 As an investigative reporter for the National Child Labor Committee during the early 20th century, photographer Lewis Hine documented the fact that children were being exploited in factories, mills, mines and fields across the nation. Just as Hine had found ways earlier to set up his camera quickly to record the faces of immigrant families in the harsh, poorly lit circumstances of Ellis Island, he brashly entered domains where he was unwelcome to document evidence of the little boys and girls laboring. Fifty-nine of Hine's photographs are reproduced here with great technical skill. His works retain the power to astonish and anger, as does Freedman's account of the psychological and physical oppression of children used as beasts of burden. Freedman's written portrait of Hine at work is equally moving; Hine was a man who defined his work and was later defined by that work. Born in 1874, Hine grew up in Oshkosh, Wisconsin. ©1994 Cooperative Children's Book Center