Anne Frank, Beyond the Diary: A Photographic Remembrance 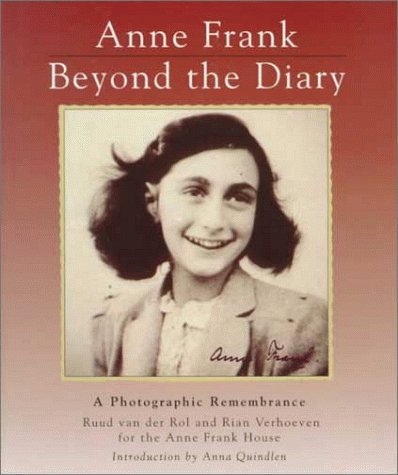 The first picture in this photobiography is of a little plaid book that is so unassuming as to be ordinary. The realization that this is THE diary hits with sudden force. The power of this volume is in that moment and many others like it as readers are reminded over and over again that Anne Frank's life was as ordinary as it was extraordinary. In photographs that show her from babyhood through her early teens, prior to going into hiding, it is the captured moments of daily living that bring home the terrible enormity of what later happened - the toddler playing with friends in the yard, the girl of 10 just out of the water and wrapped in a bathrobe at the beach. In one sense, this is anybody's - and everybody's - family album. Early on in Anne's life, there were ominous developments in the world beyond that yard and beach, and throughout the text describing her family life, sidebars present information on Hitler's rise to power and the systematic internment and killing of the Jewish people. Anne's family protected her from knowing much of what was happening, even as they took steps to save themselves, but excerpts from her diary prior to and throughout the time they were in hiding reveal her growing understanding, at the same they reflect her hope that the best in people will ultimately prevail. Readers will be fascinated and moved by this powerful book from the Anne Frank House in The Netherlands which provides insight into the life and times of a girl whose words continue to touch the world. ©1993 Cooperative Children's Book Center

Translated by Tony Langham, Plym Peters. Translated from the Dutch