Child of the Flower-Song People: Luz Jimenez, Daughter of the Nahua 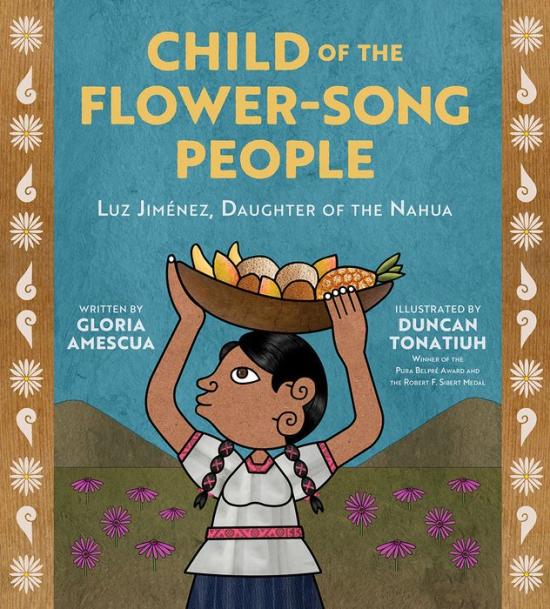 Luz Jiménez was born in Milpa Alta, Mexico, at the end of the 19th century. She grew up speaking Nahuatl as her first language and hearing the stories of her Aztec people from her elders. She also learned her people’s traditions: how to grind corn, use her toes to twist yarn, weave, and gather edible mushrooms and medicinal herbs. She was a curious girl who wanted to learn to read and one day be a teacher, but the government school she was forced to attend wouldn’t let her use her own language or traditions. After her father was killed when Milpa Alta was taken over during the Mexican Revolution, she and her family moved to Mexico City, where Luz soon befriended artists such as Diego Rivera, Fernando Leal, Tina Modotti, and Jean Charlot. She soon became their favorite model, most often posing while engaged in traditional activities, which helped to document her culture. She taught her language to scholars, and took anthropologists and artists on tours of Milpa Alta. When she was invited to teach Nahuatl at a college in Mexico City, Luz finally realized her dream of becoming a teacher. This fascinating story of the life of one woman who is credited with preserving much of what is known today about Nahua language and culture is brilliantly illustrated with Tonatiuh’s Mixtec-inspired stylized illustrations. A timeline, glossary, citations, and a bibliography follow informative notes from both the author and illustrator that outline how they researched the subject. ©2022 Cooperative Children’s Book Center