The Great Trouble: A Mystery of London, the Blue Death, and a Boy Called Eel 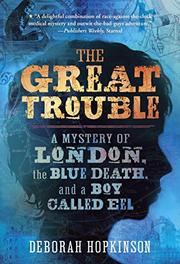 n the London of 1854, Eel’s position as pub errand boy is a welcome step up from his previous work as a mudlark, digging coal and other valuables out of the river. But when he’s accused of stealing on the job, his attempt to prove his innocence is stymied. The tailor ,who can vouch for Eel’s honesty, is gravely ill with cholera and unable to defend him. Eel has another job cleaning animal cages at the home of Dr. John Snow, and when the doctor finds out about the cholera outbreak, he enlists Eel’s help: Snow believes cholera is spread through water, but his idea goes against the public and medical belief of the time—that it’s spread through bad air. Eel helps the doctor by interviewing survivors in his neighborhood, to test Dr. Snow’s theory that all got water from the Broad Street pump. Everyone thinks the Broad Street water is the sweetest around; even with evidence how can Dr. Snow convince the local committee to remove the pump handle? By finding an oddity—a case in which someone who drank Broad Street water but lives far away from the outbreak grew ill. And Eel does, but is kidnapped by his bad-news stepfather before he can report his findings. This historical medical mystery combines the methodical approach of Dr. Snow’s real-life science with Eel’s personal story (including a younger brother he’s attempting to hide from their stepfather) and vivid details of life during this difficult time. ©2013 Cooperative Children's Book Center