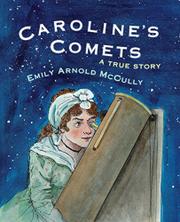 Caroline Herschel, Hunter of Comets, grew up knitting stockings and performing the duties of a scullery maid for her own family. It wasn’t until her brother, William, moved to England and invited her to join him that Caroline finally escaped these duties (although not without first making two years’ worth of stockings). William was a musician, but he was also interested in planets and stars and other objects of the night sky. With Caroline’s assistance, he built a telescope—the best one in the world at the time. After discovering the planet Uranus, William was appointed King’s Astronomer. Meanwhile, not only was Caroline quietly assisting William with his observations and records, she was also keeping his house, cleaning equipment, sewing, handling her brother’s accounts, and making astronomical discoveries of her own. Her discovery of “the Lady’s Comet” led to Caroline becoming the first professional (and famous) woman scientist. Short excerpts from Caroline’s autobiography add a dash of her spunky personality to the story and emphasize the astronomer’s intelligence, mettle, and devotion to her brother in this picture book account of her life. ©2017 Cooperative Children's Book Center