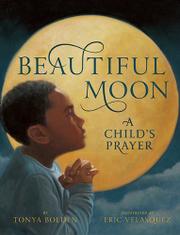 A little boy who forgot to say his prayers climbs out of bed and observes the beautiful moon before bowing his head. “Blocks away, a woman, bundled up, a park bench her bed, gazes at the beautiful moon, willing herself warm. The little boy prays for people with no homes.” The little boy also prays for wars to end while a man on a speeding train doesn’t notice the moon as he thinks about his daughter, a soldier overseas. As a man in a hospital gazes out the window, the boy prays for sick people. A family looks at empty cupboards by the light of the moon while the boy prays for food for all. The boy prays for the people he knows, too, and even for his turtle, Mikey. Tonya Bolden’s quiet, lyrical picture book is about compassion rather than a specific religion, and seamlessly moves back and forth between what is comforting and familiar and struggles in the larger world (with which some children are certainly familiar). Eric Velasquez’s deeply hued, realistic illustrations are full of feeling, and show a diverse cast of characters, with a young, brown-skinned boy at the heart of the story. Honor Book, 2015 Charlotte Zolotow Award ©2015 Cooperative Children's Book Center