Vietnam: A History of the War 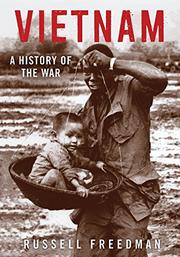 An account of the Vietnam War begins with a brief but essential look at the history of Vietnam and colonialism. The region was occupied by the Chinese for more than a millennium and then, beginning in the 19th century, by the French, while the Japanese invaded during World War II. Ho Chi Minh’s declaration of an independent Democratic Republic of Vietnam and his leadership in a war to rout the French and unify a country politically divided by Allied leadership in the aftermath of World War II coincided with the Cold War and U.S. fears of communism. This led to U.S. efforts to suppress open elections, rising U.S. military presence in the form of “military advisers,” and eventually the war. As the United States became more and more entrenched in fighting, opposition rose at home, while soldiers on both sides, and Vietnamese civilians, paid the terrible price. Freedman’s account is clear and compelling, and provides an understanding of both the political and human aspects of the war. A timeline, source notes, and selected bibliography are provided. ©2016 Cooperative Children's Book Center