Brown v. Board of Education: A Fight for Simple Justice 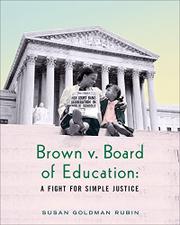 Thurgood Marshall first made a name for himself trying Civil Rights cases related to segregation beginning in the 1930s. In case after case, he and his colleagues in the NAACP Legal Defense Fund made small steps forward while looking for the perfect case to take to the Supreme Court. They found one in 1951 with Brown v. Board of Education. But that famous, landmark case was actually five cases heard together, each representing a different family in a different part of the country whose children attended segregated schools. Rubin meticulously provides details that led up to the famous case, including information about key players, including the students, their parents, and legal counsel on both sides. She details the legal history of Brown in clear language that is accessible to general readers. The way in which Marshall and his team built the case is fascinating, as are the many black-and-white photos of the people involved and the schools themselves, which showed the gross inequities under “separate but equal.” Concluding chapters look at the challenge to actually integrate the schools, which was never given a definitive timeline, and the de facto segregation that continues today by virtue of housing patterns. ©2016 Cooperative Children's Book Center