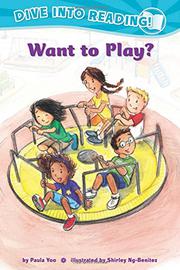 What promises to be a great new series for beginning readers debuts with Lily’s New Home, in which African American Lily has just moved to a New York City apartment building from a home that had a yard with flowers. She’s uncertain about big-city life but her parents show her parts of her new neighborhood that remind her of home and introduce her to some of the rich multicultural elements a big city offers. And at the public library, Lily finds many familiar books. She also meets Pablo, a boy who also loves to read. In the second volume, Want to Play?, Pablo takes center stage, leaving his book behind to venture out and play with Lily and introduce her to other friends. They meet Mei and Padma on the swings and join Henry for a game of basketball. Both books have the simple, episodic storylines that are the hallmark of good easy readers, as well as short sentences, large font, and plenty of white space. The watercolor illustrations offer both context clues and cultural specificity. Yoo and Ng-Benitez have created truly engaging child characters living in a vivid, realistic world with just a few masterful lines of text and ink. ©2016 Cooperative Children's Book Center