It Jes’ Happened: When Bill Traylor Started to Draw 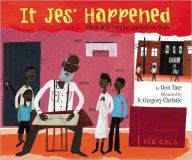 A self-trained artist who didn’t start drawing until he was eighty-five and living on the streets of Montgomery, Alabama, Bill Traylor was born into slavery in 1854 and spent his life after Emancipation working as a sharecropper. He moved to Montgomery at age eighty-one in 1935 and started drawing on scraps of cardboard in 1939, encouraged by a young artist named Charles Shannon who helped provide him with supplies. In the words of author Don Tate, Traylor’s life unfolds as a series of vivid events that Traylor would eventually transform into art. “Bill saved up memories of these times deep inside himself,” Tate writes in a repeated refrain. R. Gregory Christie’s naïve-style artwork is a perfect match for the subject of this outsider artist, and he introduces a second naive style to depict the pictures drawn by Traylor. Lyrical, literary, and wonderfully illustrated, this is a welcome introduction to an artist who, the afterword explains, is now considered one of the “most important self-taught American folk artists of the twentieth century.” ©2012 Cooperative Children's Book Center