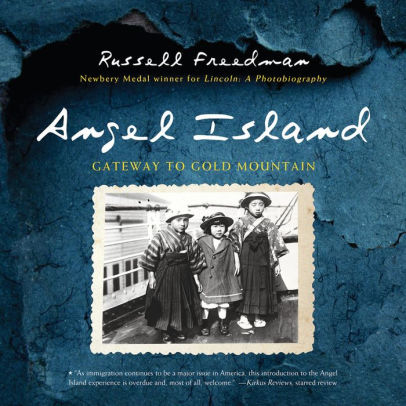 In 1970, the discovery of the thousands of poems etched in Chinese on the walls of an abandoned building on Angel Island in San Francisco Bay changed the island’s future. The park ranger who found the poems understood their significance and soon there was a concerted effort among Asian Americans to preserve the Angel Island Immigration Station as a historical landmark. This is the framing story for Russell Freedman’s account of Angel Island as the first stopping point for thousands of people entering the United States on the west coast. Freedman focuses primarily on Chinese and, to a lesser extent, Japanese immigration, but also looks at other Asian immigrants as well as European immigrants such as Jews during World War II fleeing Europe via China. The shameful history of restrictive immigration laws against the Chinese is given close treatment in a work that incorporates some of the poems carved by Chinese immigrants awaiting word of their fate. Black-and-white photographs, source notes, and a selected bibliography are included. ©2014 Cooperative Children's Book Center