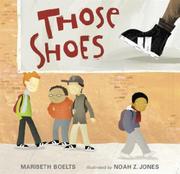 “Those Shoes” are black high-tops with two white stripes, and it seems as if everybody has them. Everybody but Jeremy, that is. When Jeremy and Grandma go shopping for the winter boots he needs, they take a look at “those shoes,” but they are far too expensive. Then they find a pair at the thrift store—almost new, but too small for Jeremy’s feet. He insists they fit, and when Grandma won’t buy them, Jeremy uses his own money. “I squeeze them on and limp to the bus stop.” .Maribeth Boelts has written an achingly realistic story about a young boy who wants something that it simply isn’t possible for his family to provide. Jeremy’s desire is fierce, but so, too, is his reason, as well as his compassion. Resigned after all to wearing a hand-me-down pair that are an embarrassment, Jeremy finds a way to pass on the too-small pair of “those shoes” to Antonio, a smaller classmate whose need, desire, and pride match his own. Noah Z. Jones’s illustrations set the story of Jeremy, who is Black, and Antonio, who is white, in a multiracial urban neighborhood. Highly Commended, 2008 Charlotte Zolotow Award ©2007 Cooperative Children's Book Center