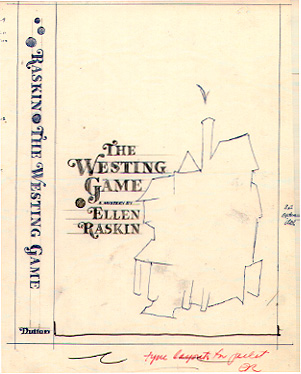 Ellen Raskin often remarked during her career that she wished she had known “where children’s books come from” while she was a young UW-Madison art student. She wanted to make it possible for future UW-Madison students to see something of the creative process of writing a manuscript, the editorial process and matters concerning page and jacket design, decisions concerning the selection of the typeface, and many other details about creating a children’s book.

Raskin knew that the very people she hoped her manuscript materials might inspire are in and out of the CCBC all the time: art students, student writers, teachers of writing and others interested in the creative process.

As of 1978 Raskin had made two earlier offers of selected archival materials to the CCBC. Her generous offers had been turned down, because manuscripts are not within the scope of CCBC collections.

In 1978 Raskin offered a manuscript to the CCBC for the third time. CCBC Director Ginny Moore Kruse reminded her once again that the CCBC is not equipped for preservation. Raskin made it clear that she wanted the manuscript materials to be used, commenting that it wouldn’t matter if they fell apart because of use. She preferred to think of her papers as being seen by interested art students at UW-Madison and others as opposed to being preserved but unseen by all but a few scholars. She was adamant on this point. Kruse decided to accept the offer on behalf of the CCBC. The CCBC would receive the manuscript materials for The Westing Game, edited by Ann Durell and published in 1978 by E. P. Dutton.

Ellen Raskin hand-delivered complete manuscript and design materials for The Westing Game (E.P. Dutton, 1978) to the CCBC on May 2, 1978.

The Friends of the CCBC held their first annual program meeting that day. UW-Madison Library School Professor Gertrude B. Herman was one of the founders of the Friends of the CCBC. Because she had a long professional acquaintance with Ellen Raskin, Herman introduced Raskin to everyone assembled in the CCBC conference room. Speaking into the small mike of a tape recorder, Raskin “talked through” the drafts of her manuscripts, telling how she developed The Westing Game.

In these years, few writers compose manuscripts by hand or with a typewriter, but in 1976 when Ellen Raskin began to write one of what she called her “longer books,” few writers had word processing programs for developing early drafts for future publication. The Raskin manuscripts reveal multiple revisions of each draft. One can see not only the role of the literary editor and the copy editor, but the way in which an author shapes her work, something an outsider can rarely, if ever, witness, especially today.

Raskin always selected the typeface and designed the title page and each other page, as well, for each of her books. She designed the jacket and did the necessary color separations. All of these papers are included in the manuscript materials, along with Raskin’s notes to herself while she was working on the book.

The Westing Game won the 1979 John Newbery Medal for distinguished writing for children from the American Library Association, the 1978 Boston Globe – Horn Book Award for Best Fiction for Children, and the 1979 Banta Award for writing excellence in a general literary competition of the Wisconsin Library Association.

More than twenty years later, and fifteen years after the untimely death of Ellen Raskin, we are pleased to be able to help fulfill the author’s dream of making the manuscript more widely accessible by showing portions of it on the CCBC’s web page and by webcasting the original audiotape that Ellen Raskin recorded at the CCBC on May 2, 1978. These pages have been designed so you can listen to Raskin’s words while you view the corresponding parts of the manuscript. Brief explanatory notes also accompany each section so that you can learn what Raskin said about each portion if you are unable to listen to the archived audiotape.