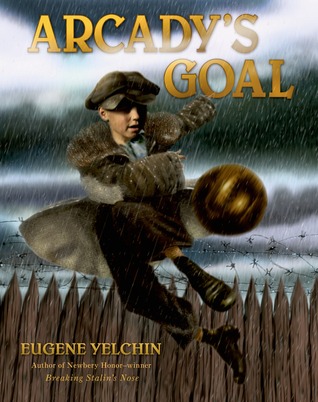 Young Arcady is living in an orphanage in the Soviet Union in 1950, and soccer is his answer for everything. When Ivan Ivanyvich adopts him, Arcady assumes the man must be a soccer coach. In truth, Ivan is simply a sad, lonely widower trying to fulfill a promise by adopting a child. He is patient, loving, and occasionally annoyed, but Arcady is so convinced he’s a coach that Ivan finally plays along. He forms a team, he tries to coach Arcady and the other boys, and he fails. Then comes word that the Red Army soccer team is holding tryouts, and Arcady is determined to attend. Eugene Yelchin’s novel is about a boy and a man who are learning to become a family. The disconnect between Ivan’s understanding of this and Arcady’s absolute blindness to it is both funny and tender. Arcady first calls the Ivan “Coach,” and, when he proves to be no coach, Ivan Ivanyvich. When Arcady, who is also learning that it’s safe to feel, and that love can be unconditional, finally calls him “Dad” it feels like something far sweeter than victory. Occasional black-and-white illustrations by the author offer additional moments of poignancy in a story set against the backdrop of Stalinism, with the fear under which so many lived occasionally bubbling up to the surface. ©2014 Cooperative Children's Book Center