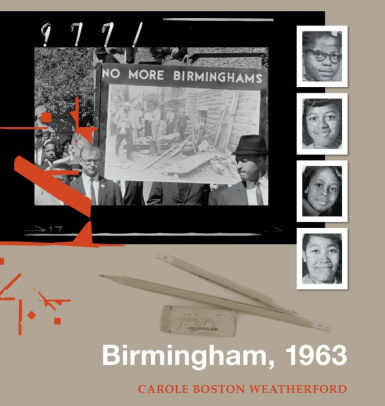 Child’s-eye details ground Carole Boston Weatherford’s story of the Civil Rights movement in 1963, especially in Birmingham, Alabama. Her spare and deeply affecting narrative poem gradually builds to the church bombing in that city that murdered four African American girls. There is a shocking numbness in the matter-of-fact voice of the fictional narrator, a young girl describing significant events in that year. “The year I turned ten / I missed school to march with other children / For a seat at whites-only lunch counters.” That terrible Sunday in May is also her birthday: “The day I turned ten . . . / My brother sopped red-eye gravy with biscuits . . . The day I turned ten / Someone tucked a bundle of dynamite / Under the church steps / Then lit the fuse of hate.” The young narrator goes on to remember each of the four girls, ending with these poignant, painful lines about Carole Robinson: “Carole, who thought she might want / To teach history someday / Or at least make her mark on it.” Archival photographs on each two-page spread provide haunting and disturbing visual imagery (e.g., firehoses on marchers, a hooded Klansman, the heavily damaged church, four smiling faces in school photographs). Extensive notes at the volume’s end elaborate on historical details referenced in the poem and photographs of this compelling work. ©2007 Cooperative Children’s Book Center