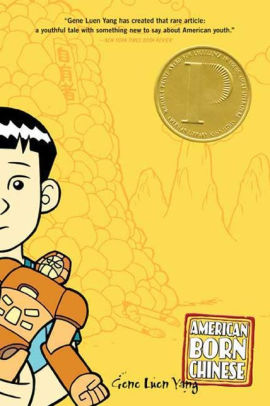 The Monkey King is tired of his second-class status. Adored by his own subjects, he is snubbed by human deities until he perfects his powers and literally beats them into submission. “I am not a monkey” he proclaims. “I am the Great Sage, Equal of Heaven!” Jin Wang is the only Chinese American student at his school. When Wei-Chen Sun arrives from Taiwan, Jin Wang thinks, “Something made me want to beat him up.” Still, it’s not long before the two boys become best friends. Blond-haired Danny’s life would be perfect were it not for his cousin, Chin-Kee, who embodies every offensive stereotype of the Chinese, from buck teeth and braided ponytail to mispronunciations (“Harro Amellica!”). Gene Luen Yang’s brilliant graphic novel moves back and forth between these three separate narrative strands, each one exploring issues of identity, belonging, humility, and friendship as the storylines develop. Yang’s narrative builds to an unforgettable and dazzling series of revelations as the three storylines surprisingly converge in a book that is eye-opening and provocative, pushing the boundaries of comfort for readers as it exposes racism from its most subtle to most overt. ©2006 Cooperative Children’s Book Center