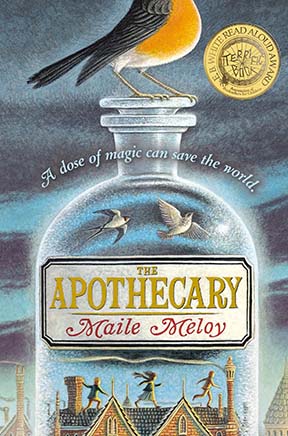 An immensely satisfying historical fantasy set during the Cold War opens as fourteen-year-old Janie’s family flees to London because her parents, Hollywood writers, were about to be called before the House UnAmerican Activities Committee. Janie’s anger at moving soon gives way to curiosity: Benjamin Burrows, a boy at her new school, is convinced that the Soviet diplomat father of one of their classmates is involved in some sort of intrigue and invites Janie to spy on the man with him. But they aren’t prepared to see the man pass a note to Benjamin’s father. It turns out that Benjamin’s dad, an apothecary, is part of a small international group working to counter the nuclear threat to the world by using sophisticated magic to contain a nuclear explosion. Neither Eastern nor Western Bloc governments are happy about this discovery. Janie and Benjamin learn all this while on the run with Pip—a savvy street kid--after Benjamin’s father disappears. He has left them The Pharmacopoeia, a centuries-old book of magic and potions, and they use some of its simpler spells--like transforming into birds--to elude capture from agents on all sides. The trio tracks down the members of the nuclear containment group, including Benjamin’s dad, and discover they are planning to test their containment theory when the Soviets detonate a newly developed bomb in a remote area of the North Sea. Maile Meloy’s debut novel for children is a scintillating page-turner featuring wonderfully appealing characters in a story of adventure and mystery firmly grounded in the tense political climate of the 1950s. ©2011 Cooperative Children’s Book Center