A Path of Stars 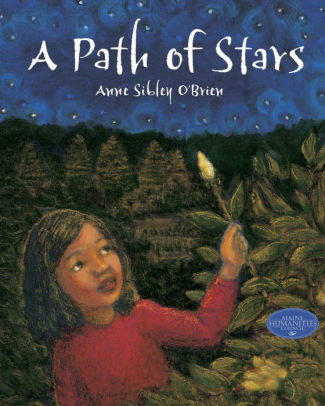 Dara is a Cambodian American girl living with her parents, little brother, and grandmother, Lok Yeay. Lok Yeay often tells stories about life in Cambodia years ago, before she fled with her brother and Dara’s mother, who was then a baby, during the war. They eventually settled in Maine. But Dara’s great uncle later returned to Cambodia, and Lok Yeay has not seen him in many years. When word comes that he has died, Lok Yeay grows very sad and won’t leave her room. Worried Dara looks for a way to help her grandmother, first praying with her at the family shrine, and then weaving the beautiful details that she’s heard about Cambodia over the years into a story about the trip they will all someday take. “We will find the house by the river and our family living there … All around us, the air will smell of flowers.” Notes at the end of this fairly lengthy and skillful picture book narrative provide more information on Cambodian refugees in a story firmly grounded in the present while referencing what happened in Cambodia under the Khmer Rouge in the late 1970s in an age-appropriate way. ©2012 Cooperative Children's Book Center