Brave Music of a Distant Drum 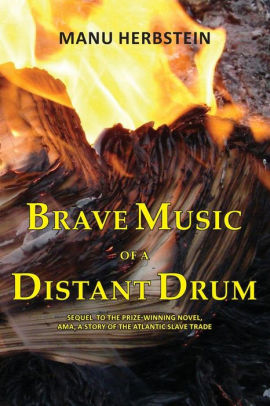 Ama was captured and bound into slavery as a young woman. Here she recounts her life to her adult son, Zacharias, who was raised from the age of ten in the family of his white owners. After being sold as a slave, Ama become the mistress of the aging Dutch governor of a plantation in the Caribbean. For a while her life was one of relative ease—something for which she later felt shame. But that one period was respite in a life marked by brutality and her own fierce determination to survive. Zacharias, a devout Christian, barely remembers life with his mother, so he is initially put off by her pagan practices and grim account of her past. At times her story is almost too painful to hear, and Zacharias is resistant to believing bad things about the white family who raised him, and who have promised his eventual freedom. But Ama insists he listen, knowing his future is dependent on understanding the past. This intense, painful narrative, adapted from the author’s adult book, Ama: A Story of the Atlantic Slave Trade (EReads, 2000), may be of particular interest for upper-level high school classrooms. ©2012 Cooperative Children's Book Center