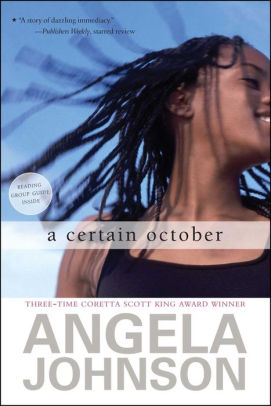 High school junior Scotty lives with her dad, stepmom, and seven-year-old autistic brother Keone. One afternoon she’s on the train with Keone and talking to Kris, a boy she’s held a grudge against since he put gum in her hair when they were much younger. But this day the grudge doesn’t matter: she and Kris are flirting. Then there is the screeching of train brakes and the slow motion of an accident unfolding. “I see Keone flying through the air and I think for a minute he must feel like Superman.” Keone ends up in a coma. Kris is killed. And Scotty is left burdened—by worry over Keone and grief and guilt over Kris, who should have gotten off the stop before but didn’t, because of her. Angela Johnson’s story, set over a single month, unfolds in a narrative that moves back and forth between the before and after of that event, between days when everything seemed so carefree for Scotty, and days when it seems nothing will be easy again. Small details and exchanges reveal the weight and meaning of relationships that sustain her, from her stepmother’s fierce love to the comforting presence of friends with whom she can move seamlessly between laughter and tears. Johnson’s storytelling is both restrained and compelling. She doesn’t hold readers in suspense or build to some contrived cathartic release; instead, Scotty’s journey is one that mirrors the way deep sadness in real life comes and goes, and gradually begins to ease. ©2012 Cooperative Children's Book Center